Some days you don’t think you should have the honour of being called a ‘mother’.

Some days it all just feels too hard.

Some days you whine like a bitch and cry like a baby. You cry more than your own baby.

Some days it takes every ounce of energy not to say ‘fuck off’ to your children for every second, every look, every breath that they take, especially for when you’re hiding out in the toilet.

Some days you hate the role of “mother”. It’s unpaid and unappreciated and you’d rather bury yourself in your ten-foot high dirty washing pile even though you’re scared of germs and goobies. And by germs and goobies you mean stinking-arse-crack-and-sweaty-ball-jock goobies. Bonus, at least, you know they’d never look for you there.

Some days when they say, for the hundredth time prior to 9am, that they’re hungry you just want to grab them by those shitty jocks, lift them so high in the air it’s no longer a wedgie they’re wearing but dental floss for their back molars. Here’s hoping they can taste their own ball sweat.

Some days you just want to unleash the wrath of brain cell killing by giving them their iPads and 24 hours of screen time and high-fat, artery-hardening junk food for breakfast, lunch and dinner and a padded cell (actually, that’s for you) just so you don’t have to hear them or see them or talk to them for one whole glorious day.

Some days you feel so wild at the lack of gratitude your kids have that there’s a little ball inside your belly that wants to explode and bounce shit-fuck-shit off every single wall but you don’t because of the guilt and mess. But mainly the mess. But that doesn’t matter anyway because your clean-two-minutes-ago home is, thanks to them, now-a-fucken-pig-sty.

Some days you can only manage to eat popcorn for lunch because there’s nothing left to eat and there’s no way you are dumb enough to tackle the supermarket with this fucked up attitude and those kids.

Some days you let that popcorn get the better of you and you beat yourself up because you only started your new weight loss diet two hours ago.

Some days you want to throw a two-day-old-shitty-nappy with your fiery resignation letter tucked inside at the bosses face, defiantly stick your middle finger out and scream “Fuck you, I QUIT!”

Except there is no boss.

The only boss here is you.

And that wasn’t a two-day old shitty nappy if you’re honest – it was three.

So now you have three-day-old-shit in your eye.

And possibly some in your mouth.

Some days you can blame PMS for your behaviour.

Some days you’re not a nice Mummy, hell you’d lucky to be classed as a nice person some days.

Some days it’s ok too. 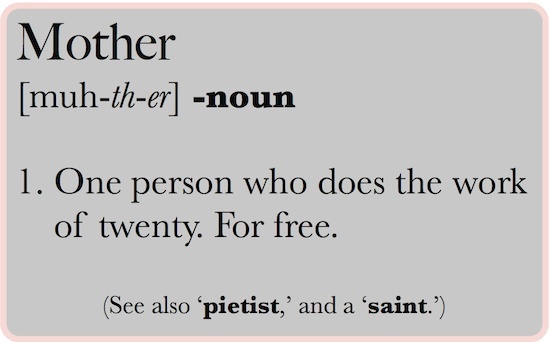 One thought on “So You Quit Parenting?”

Musings of the Mind

Sharing what living in Seoul is teaching me