I like to share and by that I don’t mean the “Share” button under peoples Facebook statuses. I also don’t like to share drinks, toothbrushes or husbands. Instead I like to share information about myself especially in the company of complete strangers. I’ve heard of Verbal Diarrhea before so I thought I would Google it just to see if such a thing really did exsist and if in fact it was what I was suffering from ….

The results were these definitions:

“A serious disease which, once it has control of a person, causes them to spew forth incoherent babble from the bowels of the voicebox.”

“A condition suffered by an individual who has the inablility to shut the fuck up.”

My diagnosis: A Moderate to Severe form of Verbal Diarrhea ….

So lets play a game… I’m at the check out and you’re the check-out person. I say “Hi” and you say “Hi, how are you going today?”… Well then, it’s game over! You lost and I won! Coz you crazy son-of-a-gun just opened the flood gates to hear all the inside info of this Superwoman. There is NO simple answer of “Good thanks”; “I’m OK” or “I’m well. And you?”. But instead by the time I’ve finished talking, you’ve bagged my last item (remembering I shop for seven people) and learnt that my baby doesn’t sleep through the night, I have an irrational fear of spiders – even the cartooned variety – and my plans for the future include winning the lotto, inventing a fat-sucking mosquito and never, ever giving birth to any more children.

I’m not an over-sharer because I like people knowing my business but I share because I feel like I owe people an explanation about who I am and so I can answer all the questions that I usually receive – but in one foul swoop! Let me give you an example… The other day I’m at a ladies house picking up an item that I bought from her on a Facebook Buy and Sell page (classy I know!). She is a complete stranger but she’s nice enough. We are chatting away quite comfortably when she blows it by asking me how many kids I have! Before I knew it I had explained to her that “I was on my second marriage”; that “only the two littlest kids were my second husbands biological children”; that “I had been a single mum for two years after my divorce”; and that “I now owed a TV in my bedroom so there wouldn’t be any more kids”. The last one is usually just to bust that joke before someone else does. It’s not quite as funny when they don’t get it though. But seriously! The actual answer to her question was really quite simple. All I had to say was FIVE!

E… Five! I have FIVE children… FULLSTOP. END OF SENTENCE. NO MORE SPEAKING! But I jump ahead so far of the usual question carosuel that I receive of “Wow. Five? What are their ages?” Snowballing next to “Oh thats a big age gap?” And then to “Did you and your husband plan to have such a gap in their ages?” etc … And yes, people really are that invasive sometimes so I just let them have it all! Right from the get-go!

I do, generally, walk away from those conversations thinking “Holy crapballs! Someone get me a bib coz I’m dribbling shit all over the place!”

Divulging so much information, although traumatic for the poor checkout person, gives me the opportunity to explain my life so that I am not unfairly judged. I get to set ‘the story’ straight coz some people have really big imaginations!! As a Superwoman though I think I need to learn to be a little more mysterious… Not everybody needs to know about my dirty little secrets – which really aren’t that dirty at all… It’s just the way my life paned out!

10 thoughts on “Confessions of an Over Sharer” 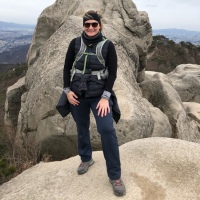 Sharing what living in Seoul is teaching me